A Spanish-based architectural firm, Zooco Estudio, has designed the interior of an Asian restaurant known as the El Camino restaurant. Located on the sea-facing beach la Segunda in Sardinero, Santander, Spain, makes this restaurant has a fairly strong character. From here, the beach and the sea have provided inspiration for Zooco Estudio in bringing the character of the sea and beach into the interior of El Camino. In this design, Zooco Estudio adopts a design that brings the underwater world to the interior of the restaurant. However, Zooco Estudio also tries to avoid the clichés of marine fantasy by introducing abstractions embodied in textures and shapes reminiscent of the underwater world, such as fish scales applied to walls. All this translates into a curved geometry that speaks of ocean waves. El Camino features a color palette that creates a warm and relaxed atmosphere in the space to fulfill the wishes of its clients. Therefore, Zooco Estudio uses brown as the dominating color in the restaurant interior. Most notably, the wall element consists of semi-transparent cylindrical panels with reflective elements that represent the sparkle of the waves in the sea when exposed to sunlight. (The curved brown sofa seemed to give a warm hug)

In addition, the clay elements that overlap on the walls also form a visual like fish scales. Not stopping there, Zooco Estudio also presents a terrazzo depicting sand to complete the setting like on the beach. (El Camino's interior is dominated by wood and clay)

In material selection, Zooco Estudio refers to the Japanese aesthetic in which timeless and warm materials are chosen as the materials that dominate the interior of El Camino restaurant, such as wood and clay applied in some areas. The curved brown sofa seems to protect guests from the waves in the ocean. The curved bar in the central area is in harmony with the ceiling above it which houses the lighting around the space and is also arranged in such a way as to stay guided by the outline of the El Camino concept.

Finally, Zooco Estudio offers a semi-outdoor area where this area provides a charming view of Sardinero. Interior| Residential|
There are no comments yet.

A Spanish-based architectural firm, Zooco Estudio, has designed the interior of an Asian restaurant known as t 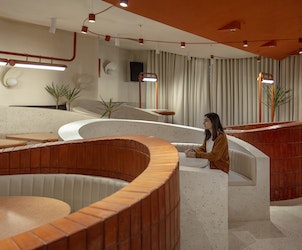 Terracotta and Terrazzo Blends in Rosie & Tillie Restaurant and Bar

When you first step into Rosie and Tillie Restaurant and Bar, visitors will see the iconic identity of this

Not Just a Bookstore, Guga Books Invites to "Fly" to the Realm of Knowledge 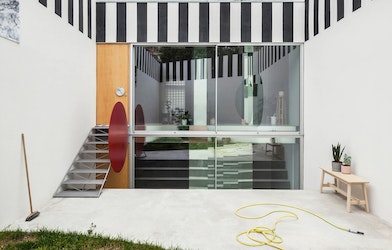 Recently, Fala Atelier has transformed the function of a two-story store into a unique apartment full of