The Rebuilding Ngarannam program, initiated by the Nigerian government and the United Nations Development Programme (UNDP), is completing the construction of 500 houses for the community affected by the attacks of the Boko Haram terrorist group. The Ngarannam Rebuilding Program creates a new village with 500 houses in it. (Photo by Tolulope Sanusi)

The settlement in northwestern Nigeria are expected to support refugees to start a new life, after their original village in Borno State was destroyed by Boko Haram in 2015. Of course, this new village has quite complete public facilities such as a marketplace, health clinic, primary school, and community center. As the architect appointed to work on the program, Tosin Oshinowo then arranged the 500 houses in a box-shaped neighborhood with communal facilities in the center of the village. Besides the central building, a pavilion can be used as a community gathering space and a covered market. View of the house from the Rebuilding Ngarannam program. (Photo by Tolulope Sanusi)

"The masterplan concept is based on a radial layout with shared facilities like the school, clinic, and marketplace in the center with easy access for all residents whose homes surround the facilities," Oshinowo explained to Dezeen.

"The designs of the individual buildings were inspired by an understanding of the local culture, as well as the environmental terrain and the existing resettlement residences already executed in the area," she continued. The village center building of the Rebuilding Ngarannam is equipped with a covered pavilion. (Photo by Tolulope Sanusi)

Oshinowo said building a new community on a very flat, sparsely overgrown vacant lot is not an easy job. Even Oshinowo had difficulty simply determining the starting point of the design. Until finally Oshinowo decided to meet the community members who would occupy the new village she designed. The decision seems to give a bright spot to the architect who also had the honor to curate the second edition of the Sharjah Architecture Triennial in 2023.

"From the first time I met with the community to initiate this project, I was very inspired by them," Oshinowo said.

"They have so much clarity around what they do and don't want, and what distance and aesthetic choices are key to their lives, cultural resilience, and community," she added. 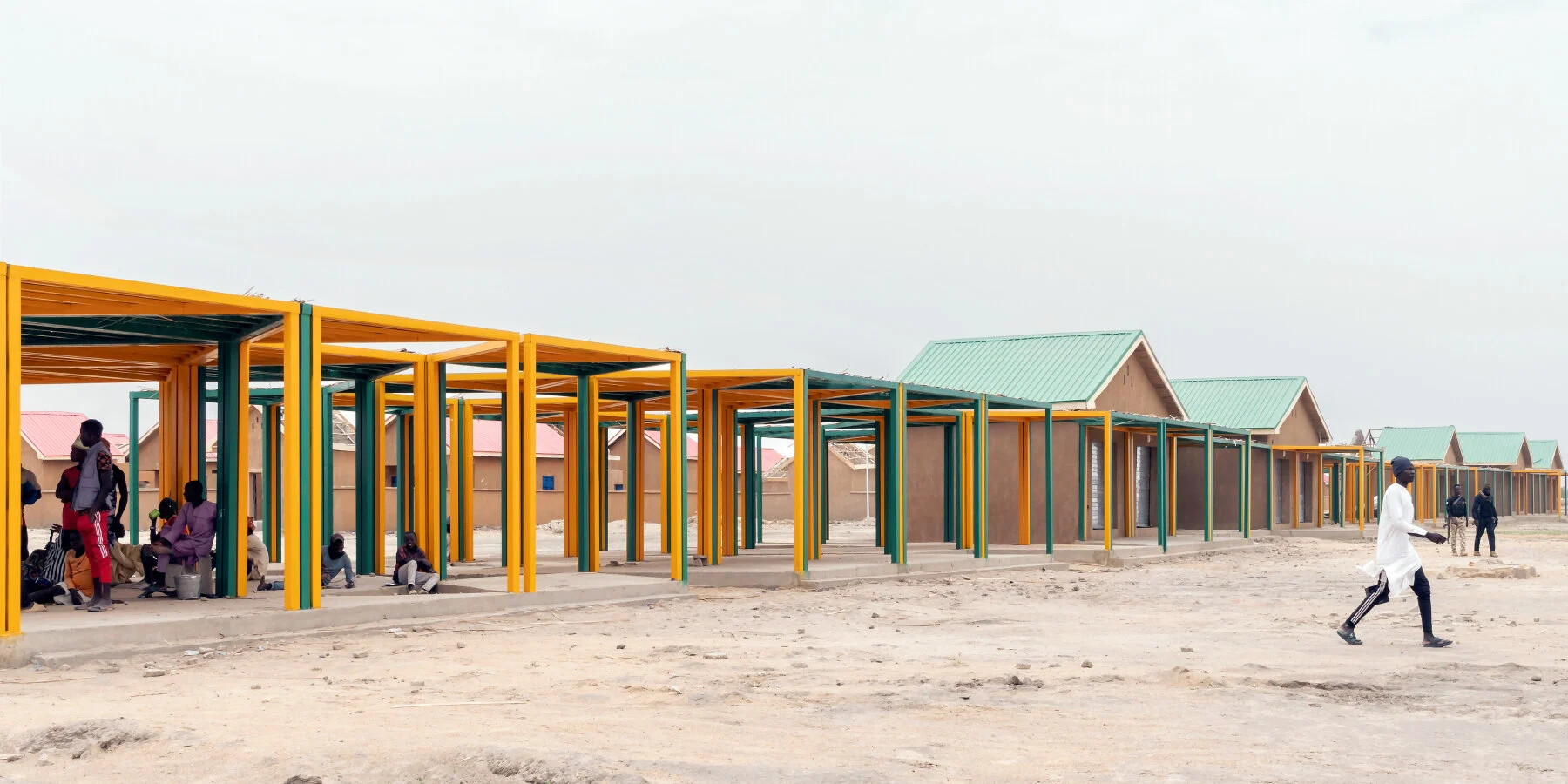 A covered pavilion that can be used for various activities in the center of the village. (Photo by Tolulope Sanusi)

From her conversations with the community, Oshinowo saw, that there was still a strong desire and desire in them to rebuild a better life. Therefore, Oshinowo does not want to disappoint them as much as possible by fulfilling what they have dreamed of regarding the house, without having to put aside the practical requirements that have existed since the beginning of her acceptance of the task. An example is color schemes of yellow and green for the pavilion, red for the roof of the house, and earth-brown for the walls of the building, which is indirectly informed by the community.

"At our first meeting, the head of the community pointed to a modern building finished with earth-brown paint. Unbeknownst to the community, this conversation is about nostalgia and the familiar, and it really resonates with me and guides the design process." 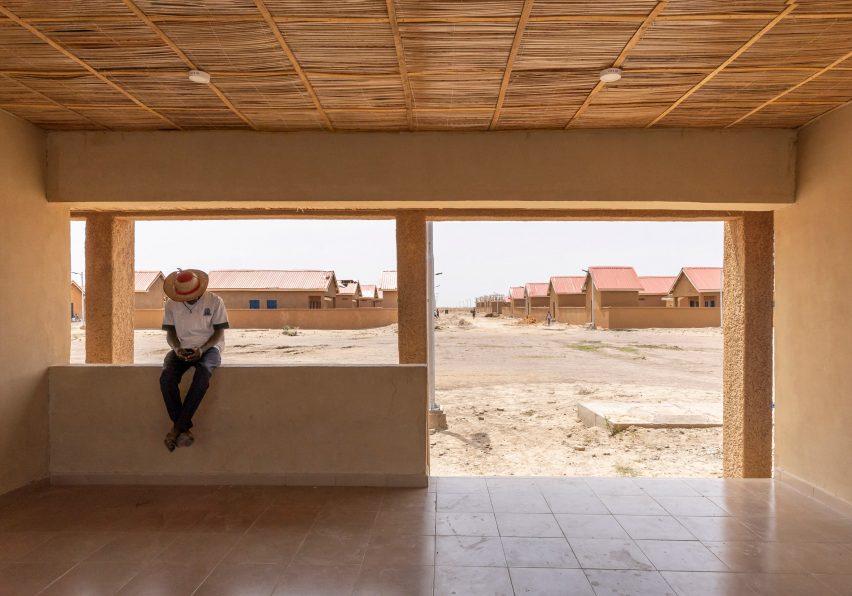 Details of the buildings in the Rebuilding Ngarannam, the walls are earth brown, inspired by the community. (Photo by Tolulope Sanusi)

Thus, Oshinowo can assert that in the end the community also became part of the design process of their new village. Oshinowo hopes that every decision she makes in designing the village can make the community proud and more confident in the future. The Nigerian government along with UNDP also plans to push the Rebuilding Ngarannam program into a prototype that can be developed again for other communities in the northwestern region of Nigeria.

"The rebuilding project is a prototype; thus, the hope is that this will be a model for projects across the region," concluded Oshinowo. 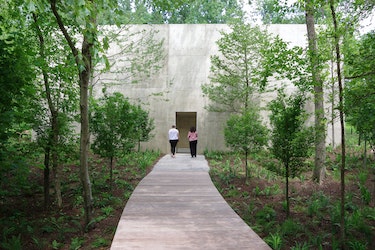 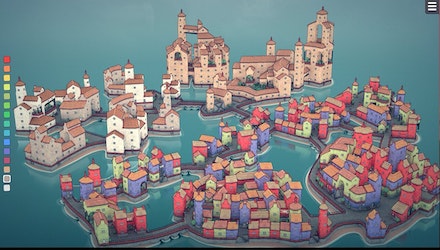 How does the Metaverse define public space the way architecture does in the real world? 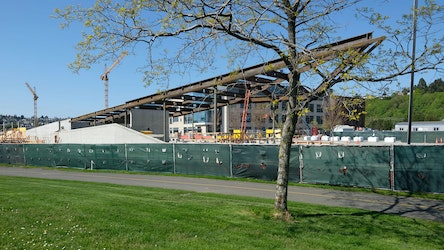 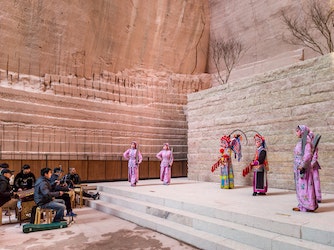 In Zhejiang Province, there is one of the many abandoned stone quarries. Responding to this, DnA_Design and