Slow but Sure, the Inverted Pyramid-Chapel of Eternal Light Comes to Align the Relationship of Two Places

Slow but sure, Bernardo Rodrigues Architects have completed a long-standing project that most of the development of the idea came from personal experiences of grief and the death of his child early in the work. The Chapel of Eternal Light was designed by Bernardo Rodrigues Architects in the shape of an inverted pyramid. (Photo by Iwan Baan)

It's the Chapel of Eternal Light, an inverted pyramid that intersects directly with the rural neighborhood and cemetery across the street. The village council in the autonomous Azores region on the southern island of São Miguel, Portugal, wants the chapel as a 'significant urban and social gesture'. That is, the chapel is expected to reconcile or harmonize the relationship between the cemetery complex and the village settlements nearby. For that, Rodrigues also shaped it in an unusual way like a flower tilted towards the sun, in order to create respect for the village and the vast ocean in front of it. The village where the Chapel of Eternal Light stands, right next to the sea. (Photo by Iwan Baan) An uphill path that leads the villagers to the chapel and cemetery. (Photo by Iwan Baan)

Rodrigues admits that the idea of ​​turning the chapel upside down stems from his trip to Tomba Brion in Italy. The family tomb complex designed by Carlo Scarpa has a bright altar due to the role of an inverted wooden pyramid. Seeing that, Rodrigues immediately poured the idea of ​​​​a chapel in the form of a pile through the design of a concrete and steel structure while covering most of the building with green Guatemalan marble. To make it more lively, some elements of the chapel were left exposed, both externally and internally. A pond that completes the chapel landscape. (Photo by Iwan Baan) The facade of the Chapel of Eternal Light with green Guatemalan marble as the material. (Photo by Iwan Baan)

As for the interior, Rodrigues tried to design a 'time apparatus' that can create a space experience as the hours and seasons pass. The walls surrounding the main hall near the altar are flooded with light from the six-meter-long skylight and small windows. Such an interior atmosphere is also combined with the wooden floors and furniture, including six chairs and stools made of Afzelia wood, which were designed by a special studio. As a finishing touch, Rodrigues added a pool designed to reinforce the building's presence in the green landscape. Interior of the altar of the Chapel of Eternal Light. (Photo by Iwan Baan) 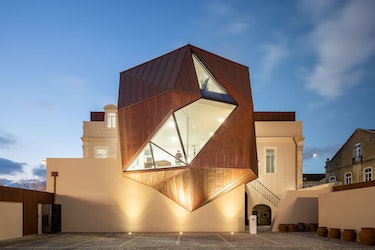 Danielmsantos Eng+Arq evokes memories of the prima donna in Figueira da Foz. A city famous for its 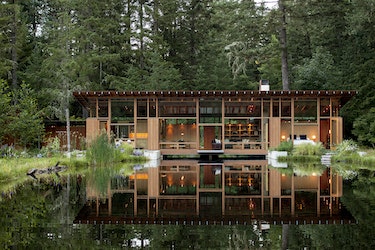 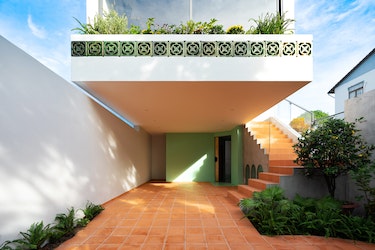 The plot was located on a slanted road branching from a lower junction. It was surrounded by greenery and 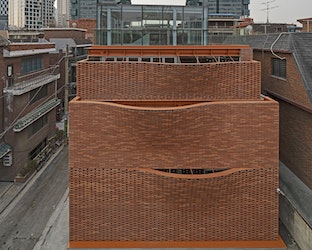 Transforming into a commercial space that allows the preservation of regional identity, while coexisting with