ecoLogicStudio is an architectural studio known for its distinctive work that often slips elements of biotechnology. On this time, ecoLogicStudio created "AirBubble Playground" an interactive pavilion for children.

"Playing provides a unique way to learn. And children are the best place to apply meta-language to understand and change their environment. In addition, children are also considered to need clean air more because their breathing is very intense when they play," ecoLogicStudio said when imagining AirBubble for the first time. (AirBubble built in a public green space in Warsaw)

The "AirBubble Playground" was built near the Copernicus Science Center (Centrum Nauki Kopernik) in Warsaw, Poland – one of the cities that earned the title of the worst air quality in Europe. According to the World Health Organization (WHO), 93% of children in the world live and play within dangerous levels of air pollution. In response to this, ecoLogicStudio designed an interactive pavilion by utilizing biotechnology (micro-algae) to create a children's playroom with good air quality.

For your information, that 'micro-algae' are photosynthetic microorganisms that utilize carbon dioxide and sunlight to form biomass and produce about 50% of oxygen to the atmosphere. So, biotechnology is the right answer to building a pavilion dedicated to children. (Interactive pavilions are presented through rope swings, swaying round boards, and football pumps for play) The structure of AirBubble Playground is made of cylindrical wood covered with a transparent membrane of Ethylene Tetrafluoroethylene (ETFE) – a modern material commonly used for roofs and facades. These two materials function as containers for 52 bioreactors from glass containing 520 liters of living green algae cultures that can filter polluted air flow (200 liters of candy).

This bioreactor works by absorbing pollutant molecules and carbon dioxide and then converting them into clean oxygen then distributed to the pavilion. Air purification process is supported by energy from heat and sunlight as well as kinetic energy from the children's movement when they play inside the pavilion. 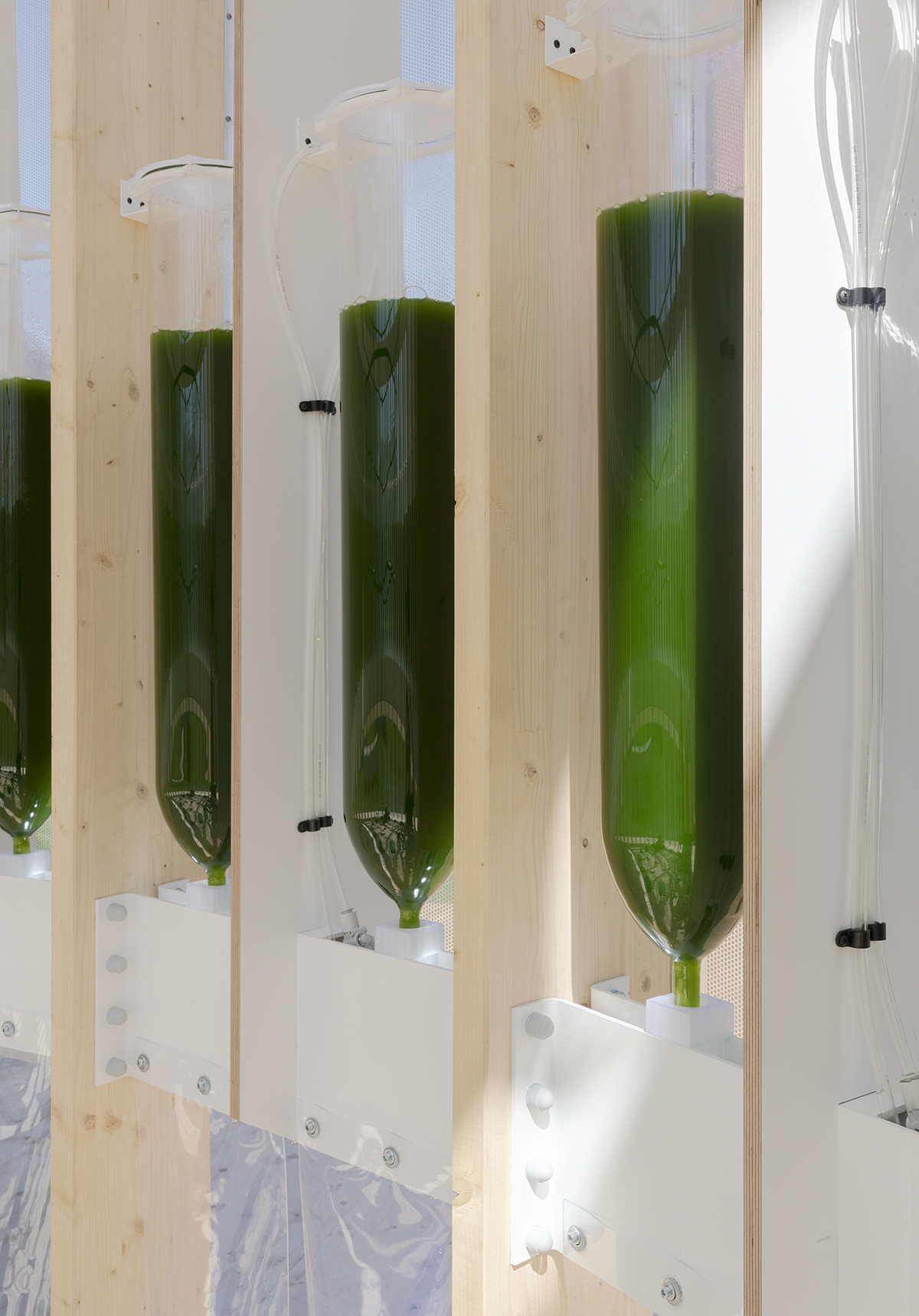 Uniquely, the air filtration process by this bioreactor creates a bubbling sound so that it can minimize noise from cities. The pavilion’s inverted conical roof intended to encourage air circulation and natural ventilation. (The roof is inverted conical to help air circulation)

To complement a healthy and fun play space, ecoLogicStudio adds interactive games, such as rope swings and round boards that can sway. In addition, there is a green ball pump that invites children to jump on it, so that it can help the aeration process needed by the bioreactor. (Children generate power for bioreactors as they play) 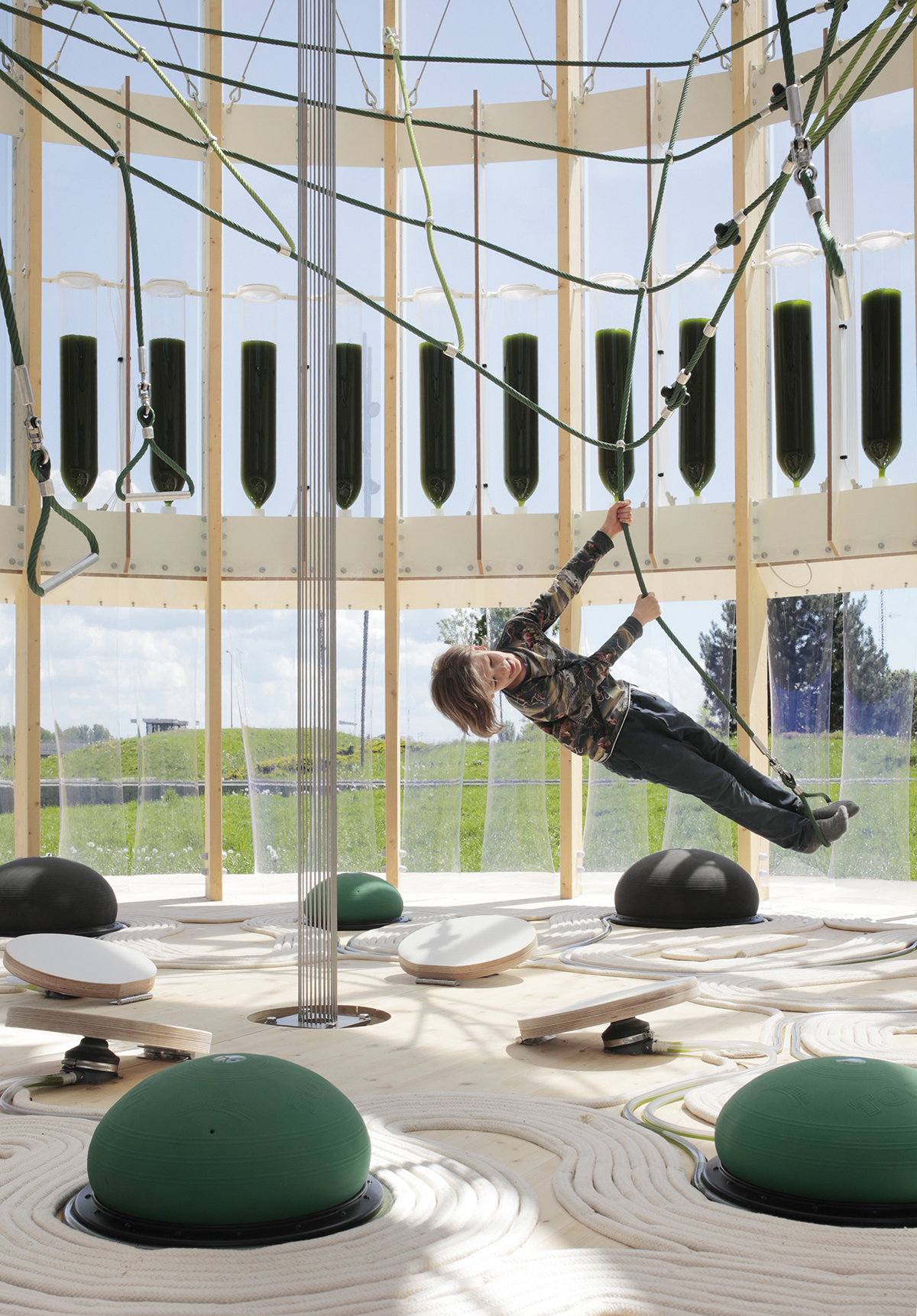 (Rope swing, one of the games at AirBubble Playground) 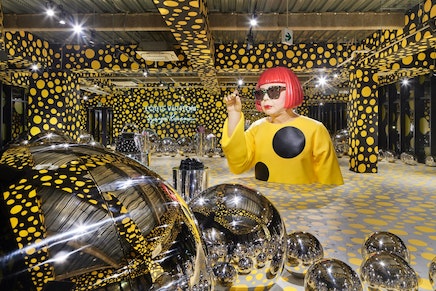 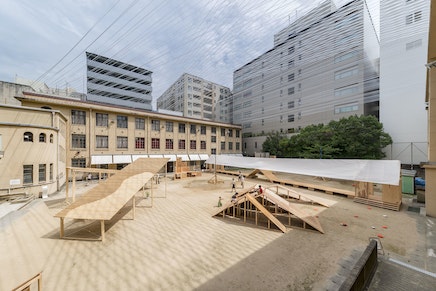 Six Architects from Different Countries Collaborate to Build Kagerou V
In the past, this place a playground for a school in Kyoto, but now its function
Design 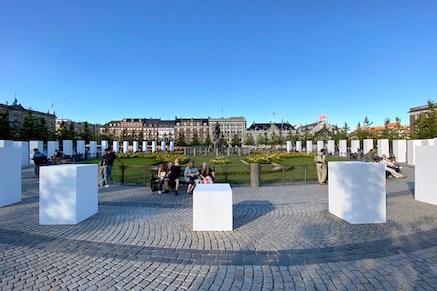 50 Queens Installation to Highlight “Gender Equality” in Denmark
Named 50 Queens, the installation was designed by BIG and Kunsthal Charlottenborg
Design 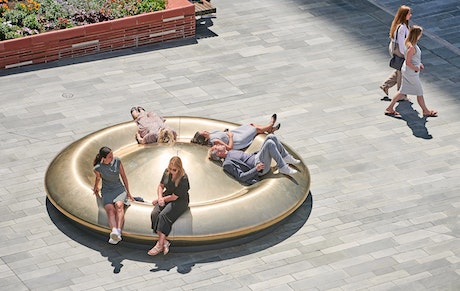 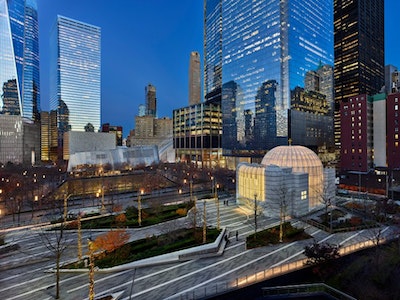