The coastal area of ​​Ise-Shima National Park has stunning ocean views but the private homes of the people who live there are scattered irregularly. Thus, according to Japanese architect KKAA YTAA, the uncoordinated housing along the winding road causes visual discomfort. At least that was their initial assumption when they received a compact weekend dwelling project which was later dubbed the 'House of Joy'.

“It’s not a bad place for the owner who wants to spend a relaxing time in a place rich in nature with a view of the sea, but I felt a sense of discomfort in this uncoordinated cityscape that suddenly appeared in the wilderness of the national park,” said the team architects of KKAA YTAA, adapted from Designboom.

“Initially, I thought about ignoring this cityscape and designing a custom-made product that matches the individuality of the owner. However, in the end, we adopted a universal type of house, rectangle, and two stories,” they continued. 'House of Joy' is located in the vicinity of Ise-Shima Nasional National Park. (Image courtesy of Norihito Yamauchi)

More specifically, the KKAA YTAA team led by architects Kei Kitano and Takanobu Yagi designed this dwelling to be a house where most of the surfaces are made of reinforced concrete blocks. The concrete blocks are left exposed to reflect a strong identity from the outside and strong against the surrounding natural scenery. However, this house is also equipped with wide openings - the windows are as high as the door and almost touching the ceiling, which can support the celebration of the surrounding scenery directly from the interior. The walls of reinforced concrete beams with wide openings become the strong identity of the 'House of Joy'. (Image courtesy of Norihito Yamauchi)

“It is also because the concrete block that gives a feeling of déjà vu is used and the degree of freedom of design is limited according to the standard dimensions of 200 x 400. It seemed natural on this site to have some elements that are similar to mass-produced standard housing,” explains the architects at KKAA YTAA.

Meanwhile, the touch of wood that spreads from the floor, furniture, and cabinets, to the roof frame, hints at a warm atmosphere in the house. The design emphasis also shows the harmony between every architectural element in the house, such as interior-exterior, universality-peculiarity, and openness-blockage. The interior on the top floor of the house is a living area. (Image courtesy of Norihito Yamauchi) The interior on the top floor of the house is a living area. (Image courtesy of Norihito Yamauchi)

“By doing so, the outlines and boundaries of the building will be blurred, the personal arbitrariness of our designers will be diminished, and it will be possible to accept various views of residents and visitors, and all surrounding environments,” they said.

“We hope that this flexible and inclusive architecture will integrate the boundaries between nature and the cityscape over time,” they concluded. Stairs connecting the ground floor to the top floor of the house. (Image courtesy of Norihito Yamauchi) Ground floor for more private areas and service rooms such as this bathroom. (Image courtesy of Norihito Yamauchi) 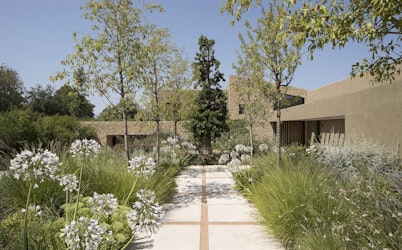 The Humility of a House in Costa Brava by GCA Architects 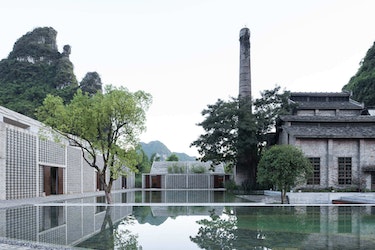 Alila Yangshuo is located in a col near Li River in Yangshuo, Guangxi. Surrounded by a picturesque natural landscap 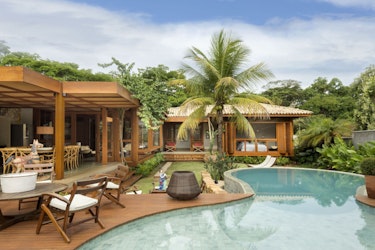 Rustic's Atmosphere of a Wooden House in Brazil

The initial brief on this project was the desire to have a home that was practical, clean, and easy to maintain. 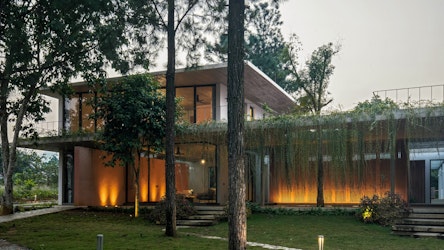 A house with residents from three generations is a challenge for architects to design a building concept.