(Text description provided by the architects)

Hidden behind several mature trees around the site, an unassuming concrete house nestled behind a long row of vertical wooden fence configuration. It is not easy to see the house on the street level because it follows the topography of the street. The difference between the highest level of the street to the lowest level of the street is five meter, while the land of the house has a difference of three meters. Instead of making itself stands out from the site, the house appropriates itself to blend in with the topography of the site thus the term cascading house fits with the way the house physically arranged and thus experienced.

The house is designed for a young couple with two small children as their second home away from their main house in Jakarta. Their main requirement is a simple house with four bedrooms, living area and service area that embody a functional and comfortable living. Having studied the site, the design was immediately inspired by the topography of the site. The site was divided into three levels on which the three main programs were placed: service and garage was placed on the highest level of the site, the living area was placed in the middle and on the lowest level was the four bedrooms arranged in two levels. The three masses cascade down the site so the height of the bedrooms mass is the same as the service mass.

Two courtyards of the same size were placed in-between the three levels and three massing creating a transition space in which the stairs are located. The courtyards serve as a source of light and air for the adjacent masses especially the middle living areas. Besides the courtyards, a reflecting pool is added next to the living room to bring cooler air into the house. The reflecting pool further flows down becoming a waterfall on the lowest level of the site constantly creating splashing sound of water throughout the house. Despite being in the middle, the living areas were able to breath with the tall and wide openings toward the pool and the courtyards.

Two materials such as site cast concrete and wood dominate the house. The juxtaposition between the coldness of grey concrete and the warmness of the wood creates a comfortable living space. The two materials continue from outside to inside of the house creating an uninterrupted spatial experience. The continuity of materials also creates a sense of cohesiveness throughout the architecture of the house. The 1.1m x 2.2 m was the module of the site cast concrete pattern. This pattern drives the way the masses are arranged vertically throughout the site. All the bedrooms area facing the back on which terraces are provided as a transition space between inside and outside. The terraces on the lower level of the bedrooms further open up towards a sunken garden gathering space.

The characteristics of the site was utilized to be the principal design idea of the house that from the beginning of the design process drove the arrangement of the house geometrically based on functions. Not only did it produce an architecture that is specific to the site but also created a comfortable and functional home that is rich with spatial interconnectedness of multiple levels with different light qualities and shadows. These experiences were unified by the two consistent materials used throughout making the house complex yet simple.

Architecture
There are no comments yet. The location of Tiing Hotel which is on the North coast of Bali with tourism developments that have... Interpretation of Volcanoes at...

Its geographical location close to Mount Merapi, Lava House positions itself as a building inspired... As a big honor to the elephant who had enormous rules in Thai culture history, Bangkok Project Studi... 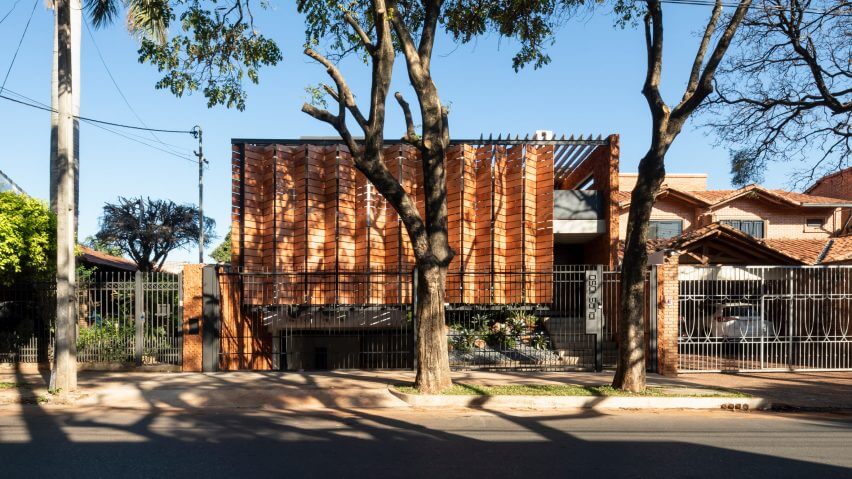 Reforma Alas is located in the Los Laureles neighborhood of Asunción, the capital of Paraguay...